My Burning Wheel game starts in a week or so. We've had two planning sessions and now it's time to play. However, because of the oppressive capitalist society in which we live, we are all VeryBusy(tm) and have chosen to play online. So far we've used Skype and google hangouts as platforms, and next week we'll try Roll20.

Skype was OK. Some of us used webcams and some just audio. Connections were reliable and A/V quality was great. Unfortunately, that's all it does. Great for distance relationships but I think I want more from a gaming platform.

Hangouts was also OK. Again, a mixture of webcams and audio. One of us joined in over his phone while driving so pure audio. Thankfully he has a mind like a steel trap so he could remember plenty from his own documents and the rules. Connectivity was a problem, though. Not sure if it was Hangouts or individual technical setup, but we lost people from the hangout often.

Roll20 looks interesting. I found a Burning Wheel game on youtube that was using Roll20. I watched about 30 minutes of one episode to see how they used the platform and was more than piqued by it. So next week will be Roll20. I don't want to invest a massive amount of time setting it up with characters and documents yet. Apparently the proof of the pudding is in the eating.

So watch this space for more about that platform experience. Other activity for this game is the wonder of inking my world map and the drawing a closeup of one area in that map that seems to be a natural space in which most of the story will take place. I know maps aren't essential for Burning Wheel but I like making them.
By Andrew Smith at January 22, 2018

I cannot lie, I love religion in gaming. Now, I should be clear about that. Unfortunately many depictions of religion in gaming (or other fiction) is a tedious variant of the 12th century Catholic Church with corrupt priests, inquisitions, and exploitation. That's a tired trope and one that adds a very specific flavour to games. It's the ketchup of religious depictions. If you like your story flavour to be common and uninteresting then do that.

What I'd rather have in a game is a religion that has an appeal to common people, that gives ordinary people a web of meaning to their lives, and that allows for corrupt clerics sometimes. I want a religion that helps explain cultural features or turns of phrase. It has to explain festivals, rites, supersititions, and more! When I started to sketch a religion for my Burning Wheel game I had all of this in mind. I could do no less. So here's my take on a creation myth for O Mortal.

There was Chaos, churning and rolling,
And there was no form.
Then the Four reached into Chaos with their hands
And took some
And shaped it
Forming land, and sea, and sky
And all the lights.
They breathed into it and time began.
Erolti made balance in the days and seasons.
Palsu made the multitudes, in living things.
Urgomath made structure, in the land.
Therokim made turmoil, in the storm and the volcano.
The Four looked and saw the works of their hands.


This seemed more fun that just saying, "The Human god is Palsu. Other lesser gods exist and rule over areas." It's also (I hope) evocative enough to give my players a sense of a cosmology, a metaphysics, some superstitions, and some divine explanations for things. Also, since the Gods and gods are real, I get to use all of this in the game. Joy!

I've been sketching a world map for my Burning Wheel game. At the moment it's a first draft only (thankfully not inked yet). The castles are major cities; each one about the importance of Paris. Using Burning Wheel's own idea that the game suits a 12th century France, that means each "Paris" has a population between 200,000 and 300,000. I might make one of them a little smaller, we'll see. Each of the square-ish dots is a medium town, with population above 20,000.

As you can tell, this is a well populated world, helped along by magical interventions in food production. There are thousands of lives at stake in any major scenario, but also enough population to support a bloated nobility. Let the rebellions foment.

For a sense of scale, the sea that diagonally crosses this map from NW to SE is around the same size as the Adriatic Sea. I plan to ink major parts of it as they become constants in the game. 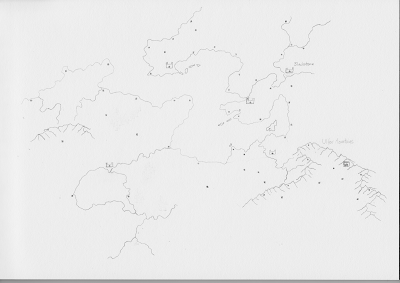 As for the campaign name, the impending presence of the qerub has siezed the group's attention so I've turned to biblical inspiration for a name. One book that has a lot of descriptions of cherubim is Ezekiel and the Tanakh translation is a particular favourite of mine. Take a look at how the cherub conveys the word of Yahweh to the prophet Ezekiel.

"O mortal, you dwell among the rebellious breed..." (12:1)
"O mortal, these men have turned their thoughts upon the fetishes and set their minds on the sin through which they stumbled..." (14:3)
"O mortal, set your face toward Jerusalem and proclaim against her..." (21:6)

I think you get the picture. This translation has used "O mortal" instead of "O son of man" that you see in many other translations. The literal translation of ben-adam is son-of-man, I realise, but in the context of an angelic being giving instructions from God to a human, I think "O mortal" conveys a layer of meaning.

That's a lot of ink spilled to say that the name I'm going with is O Mortal. Thematically I'm sure it will include the folly of human endeavour in the face of the power and desires of the gods. There will be pettiness and power squabbles, all of which will come to nothing for the mortals who will eventually, inevitably, die.

But what about the elves? They're ageless! If the war between the humans and the elves taught us anything, it is that elves can die. Violently. Painfully. Cold steel interrupting their journey to the West.

My players and I got together to talk setting and characters in our upcoming Burning Wheel game. Here's what we came up with.


Other fantasy inspirations from the group.

Interesting plot ideas from the setting

This is mostly for my players but you can read along too. :) It's some high concept statements about a setting for a new campaign.

The last Great War between the humans and the elves ended 117 years ago. The humans lost. The elves made several conditions in the surrender.

Dwarves were neutral during the war, selling metals, weapons, and armour to both sides. The dwarven lands are not united under a single monarch leaving each clan or king to trade as they wish.

Human monarchs reign in an inherited dynasty for as long as the gods allow. There are times in history when the gods send a Qerub to announce the end of one dynasty and the selection of the new one. The astrologers have announced that the next Qerub will come at the next solar eclipse, in seven moons time.

The current dynasty has granted more titles than any dynasty before. Intended to be positions of responsibility, paid for by the kings, they have turned into competitive squabbles for land. A number of vassal king arrangements have been established as the hierarchy of nobility has become more complex than ever. Minor nobles seek to strengthen their lands, towns, and villages, in preparation for eventual conflict.

Orcs continue to raid the lands of humans, elves, and dwarves, as they have done for centuries. They have never shown signs of uniting under a single ruler.

Most of the lands of humans, dwarves, and elves, are free from the worst monsters. However, the wild lands are still wild. Only the brave or foolish travel them alone. But the rumours are that the wilderness still has lost treasures in old battlefields, mines, and forgotten places. Some of these treasures are the ancient relics of power that bards still sing about.