It may surprise you to learn that one of the many podcasts I listen to is the WOTC podcast for D&D. Not very indie of me at all, I'm sure. So when you get over the shock of my class betrayal, continue reading.

The aspect of the podcast that I want to bring to your attention is an example of great game mastery. Currently, the podcast is a series of actual play episodes with a WOTC GM (Chris Perkins), the Penny Arcade guys, Scott from PvP and Wil Wheaton. Not only is it hilarious (with much foul language), it contains the work of a great GM. Listen carefully to what he does.

Knows the rules - quickly! The players want to try something and Chris very quickly has an answer. He doesn't let the rules get in the way of the game. Where necessary, he involves the players for the text on their powers and abilities, but only to help them know how to use those powers.
Evokes without cliche. NPCs have voices and attitudes, but they aren't crappy cliches like a bad 80's fantasy movie. His rendition of a bar-wench and of a dwarven warrior are great, without making me cringe.
Lets the players shine. This crowd has a particular sense of humour. Chris gives the players enough material to work with to make the snappy jokes, the one liners, and the moments of exultation that they enjoy about their games.
Keeps the adventure moving. This game doesn't bog down. If a combat takes a long time, it does so with interesting components. It's not long and boring, it's long and interesting.
Makes NPCs multi-facted. NPCs almost never attack with a single attack type, they use everything available to them. This is partially (I suppose) to advertise to the listener about all the great features of D&D, but it makes for great listening. When the NPC has a turn, it's not always with the same weapon or spell, it's one from a wide variety of actions.
If you are a GM and have time for podcasts, I strongly recommend listening to this and critically analysing the GM techniques. You'll learn a lot.
And to Chris Perkins, well done. You're a great GM.
By Andrew Smith at September 28, 2009

After a little trawling around the place, here are a couple of YouTube vids form the cosplayers point of view. Always impressed by this crowd.

Siege is a game that will capture the feel of a siege-based movie. It will play through in a single session of two to three hours, with no preparation beforehand. Just like a movie, facts about the characters will be revealed in play, making the players just as much audience as they are story-makers.
Characters in this game will take the roles of Police, Hostage or Hostage-taker. With more than three players, some of these roles will have more than one character.
Throughout the game, as facts are revealed about characters and situations, characters will gain advantages over other characters. These advantages could relate to the situation, such as "The doors are wired with explosives" or relate to characters, such as "I know that you've embezzeled from the pension fund." It will be up to the players to create these advantages and then to react to the advantages that others have over them.
The whole game will be forced into an end-game situation when any of the characters have nothing left in Resolve or Patience.
That's it for now. I have several mechanisms in mind to facilitate all these, and I hope to have a quick set of rules available soon to start playtesting with some amiable people.
This game is part of The Stockade project.
By Andrew Smith at September 24, 2009

Email ThisBlogThis!Share to TwitterShare to FacebookShare to Pinterest
Labels: Siege, The Stockade

Siege is my new project

So at Gencon I joined in the mad project of The Stockade and have in mind to take a game from idea to playable publication for Gencon 2010. I'll be posting about its progress here, rather than at a separate blog, but all the relevant posts will be tagged as Siege.
What's it about? You'll just have to keep this feed in your RSS reader to find out.
By Andrew Smith at September 21, 2009

Email ThisBlogThis!Share to TwitterShare to FacebookShare to Pinterest
Labels: Siege, The Stockade

Four days of gaming.
That's a lot of gaming. I really only did two days of it. Day 1 was all about finalising some printing and assembling a Giant D12 On A Stick. HUGE thanks go to Mark Peric and Worldwide Printing at South Brisbane for this. Great result. If you're looking for art for your game, contact Mark Peric. Here he is finishing the assembly work. Days 2 and 3 were all about indie games on demand. So many gamers, all having fun. I was booked to run for all six sessions, but Lon Teal volunteered an extra session on Saturday morning, leaving me to wander the trade hall and pick up some minis. Bargain! Of the five sessions, I ran one game of Poison'd and four of Spirit of the Century. People love that game. I need to run Poison'd again. It was my first attempt at it, and I'm sure I made mistakes. This is one of my gaming groups, posing at the D12. 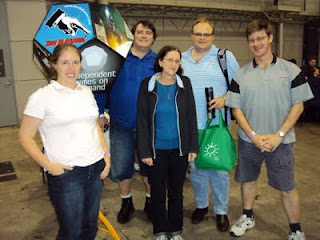 The Friday surprise was finding someone in the trade hall that stocked indie titles. Lacuna, Burning Wheel, Mouse Guard... I finally bought my copies of Monster Burner and Magic Burner. Both last year and this year, people at our indie game tables ask whether these games can be bought at the show. And now Games Paradise have stepped in. Calling cards were exchanged. Watch this space for more!
Sunday was a great surprise for me. The War Stories seminar with Mark and Nathan provoked some great questions from the audience. I just carried the microphone around, but people were taking notes everywhere. I'm looking forward to the games that come from this.
The other Sunday surprise was the Game Design Roundtable. Over two hours we managed to go through five games. One was about a royal loss of innocence, as David brought Dirty Princesses to the room. Timothy Ferguson brought a game about competitive running of a resort, complete with dirty tricks and vice. He walked in without knowing if it should be a board game or an RPG, and he walked out considering whether it should be a card game. Sam brought a computer game about giant monsters. I wasn't expecting a computer game, but the process worked well for him as well. Samuel (another one) joined in with his game idea about high fantasy mages, and was almost recruited for Ars Magica. Lastly, Steve Darlington finished off the session with his espionage game idea, and I'm keen to see whether he leaves the super powers in there.
Had a great time and have every intention of doing it all again next year.
By Andrew Smith at September 21, 2009

There is a rule of thumb that's around in the gaming world: the 3-2-1 rule. That is to say, when attending a gaming convention each day should have a minimum of 3 hours sleep, 2 square meals and 1 shower. Paul Tevis denies that this is his, but no one can find earlier usage of it ... apparently.
Despite that, this is almost good enough advice. I want to add another shower to the list, though. Or at least a can of deodorant or some cologne in each backpack.
I'm glad that the Brisbane Convention Centre has high ceilings and good ventilation. 3-2-1 might just be enough!
Hope to see you (not smell you) there.
By Andrew Smith at September 16, 2009

Email ThisBlogThis!Share to TwitterShare to FacebookShare to Pinterest
Labels: GenCon

Just before Gencon Oz kicks off, here's the summary for where I'll be.
Thursday
This is my only time to see the trade floor, and I think I'll only get to see it in the afternoon. The morning will be full of last-minute preparations for indie games on demand. Not sure what I'll buy. Last year's haul included Campaign Coins and WOTC miniatures (D&D and Star Wars). I look forward to it in eager anticipation.
Friday
Indie. Games. On. Demand. This is my entire day, from before the 10am session through to after the end of the 6pm session. I'll be at the tables from about 9am to 9:30pm. These are some of our busiest sessions, I hope we can fit you in.
Saturday
Same as Friday. I'll be there from setup to pulldown. By the end of it we will have offered about 2o-something different games from 8 GMs, 4 concurrently-running games, 5 players per game. I'm going to need lozenges.
Sunday
I'll be hosting the 9am session called War Stories and then the 10am session (2 hours) called Game Design Roundtable. If you want to take your game from idea to print, these three hours are thoroughly worth your time.
Hope to see you there.
By Andrew Smith at September 16, 2009

And we're back .. just in time

Rabid readers of my blogs will know that I've been largely preoccupied this year. I'm overjoyed to say that I managed to knock it off the list in time to prepare for Gencon Oz. There is still a lot to do, but somehow in September I managed to get that finished, spend a week in China for work and finish organising Indie Games On Demand.
So turn up! Get along to Gencon and play them thar games. I'll even be offering Poison'd in my menu, and you can play it this Saturday, which is Talk Like A Pirate Day. Don't say we don't think about these things.
By Andrew Smith at September 15, 2009