Are you about to play a game of Space Rat but have no idea for a character? Then I have the answer for you. Run a google image search for "sexy halloween costume" and you'll have all the inspiration you need.

Although, he's just as distracted by that search result as you are.

the puppies, they are dead

it feels like a rite of passage, the gamer's hajj. "you must play kill puppies for satan at least once in your life." it was a bit of a joke, just to see if i'd run it, and i did.

it's a funny little game, with some clever ideas shamelessly stolen from other games (it says so in the text). as we played we made comparisons to other games and genres. we definitely took the game in the direction of drug addled reprobates and fiasco style incompetence. a kpfs fiasco playset might be hilarious.

as the gm, i had the usual struggles to get the characters moving along. providing npcs who hate them isn't bad, but that's never the same as when the players have their own goals. poison'd has ambitions that fill this role nicely. kpfs seems like the ancestor to poison'd in a few ways. the characters are horrible and deal with devils, spirits and gods, they sin and sin and this keeps satan happy, and so on. the addition of ambitions is a good move from parody game to playable game or multi-session game.

but really, there's just one goal here: kill puppies for satan. he rewards by making them powerful. when the action slows down, the characters need to kill cute animals. deliberately. with absolute antipathy. and in doing so, they make enemies. more enemies just forces the characters to become more powerful, so they need to kill more puppies. if the players just treat puppy killing as a fun thing to do on a lazy afternoon, the game has more than enough momentum.

the listlessness of the game is its chaotic core. there's no larger goal here, just the immediacy of killing puppies and the promise of power for doing that. this is a contender for best nietzschean game ever. play it at least once.
By Andrew Smith at December 12, 2011

So, this just arrived. It's a thing now. 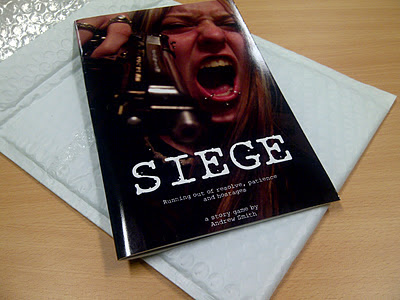 Some more play from our Burning Wheel game. We only made it to Episode 13, so I hope you can sense a crescendo in the story.

On his journey back to Foxglen, Bram met a farmer called Sigbert who he uncovered to be a cultist. Sigbert has offered the powers of the cult to help determine the origin and nature of the mark on Bram's forehead. Bram remembers nothing about it, except flashes of memories about a trial and searing pain. He and Sigbert arrive in the village the day before Darwin is due to marry his second wife Clare.

Sophie has returned to Foxglen in the middle of scandal and gossip. Rumours are flying that Bram has taken her as a lover as well as a disciple. Sophie has an argument with another lady of the village, Paltis* and loses the argument, forced to admit that she craves her independence from Darwin. He's crushed by the revelation and Sophie leaves the argument and the house.

Bram finds Sophie and shows her the brand* on his forehead. She rushes him to the temple where Fier the Priestess recoils in horror at the sight. She brings Elric the High Priest and they discuss earnestly how to save Bram from the curse. Sophie decides to have Bram blessed in order to break the curse and arranges for it to happen before the wedding.

While they wait, Bram goes to visit the cultists, Sigbert and Simon, and takes a walk to the woods with them. They take him to meet the cult leader, Unwin. Bram and Unwin are half-brothers and haven't seen each other in years. After a brief brotherly reunion, Unwin begins to prepare a ritual to uncover the secrets of the brand.

Sophie has gone home and has another argument with Darwin about Bram. Darwin is angry that Bram has displeased the gods and will bring their judgement on Foxglen.

Meanwhile, the ritual has prepared a potion for Bram to drink. He tips the foul steaming brew into his mouth and fades into a world of shifting shadows and savage spirits.
By Andrew Smith at December 06, 2011