Last week we played Lady Blackbird. I'd not played it before but had heard great things about it. Thankfully all the rumours proved true. It's an enjoyable game and you should play it with your group sometime.

During the game I noticed an interesting behaviour. I've seen it in other games as well (FU and SOTC to name a couple) but it really stood out in Lady Blackbird. I call it checklisting. It goes like this:


I lunge for the control panel to close it before the guards come through. So that's 1 die for taking an action, 1 die for athletic trait, 1 die for acrobatic tag, 1 die for sprinting tag, and 1 die for nimble... 5 dice!

I get that this is how the rules work, but after a couple of times through the checklist it started to irk me for two reasons.
1. Players make tenuous links from the traits and tags to the action they're taking. In the example above you have to imagine that the race to the control panel was not only a sprint but also included leaps and tumbles.
2. There's no narrative, just a series of adjectives. The character doesn't make a dash for the door, leaping over a crate on the way, to lunge for the panel and hit the button in time. Instead, the character succeeds because they're athletic, acrobatic, a sprinter, and nimble. One of these options makes for entertaining fiction, and the other is shorthand.

I found myself denying the players the option to do this when I knew they could do it with more flavour and story. Some of the players in the group didn't want that experience so I let it slide for them, but for the players who like the loosey goosey aspects of story games I insisted on it. They had to tell me about the sprint, about the leap, about the tumble, and about the moment they nimbly slipped between sometime in order to achieve the shortest path to the control panel.

As it happens, this kind of play style can be hard work after the first couple of times. It's easier to just checklist the thing, roll the dice, and play after the result. Maybe it's just me, but I like even just a sentence or two that connects the dice with the story. I want the dice to help the players to create the story and tell it verbally rather than leaving the details to the imagination.

So how about your game table? How do you connect the dice to way the story is told?
By Andrew Smith at December 24, 2013 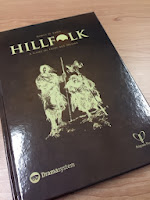 It's here at last; my kickstarter copy of Hillfolk. It's much larger and has more pages than I had expected (although I could have checked the page count in the PDF). Still, it's a beautiful book, reminiscent of the gaming books I bought in my teens: large and hardcover.

I can't recommend this book enough for all your "loosey goosey"* gaming needs. The followup settings look to be quite promising as well. Between this and Fate, I may never need to buy another game again.

Although I probably will. ^_^

* A necessary description for this product, as listeners of KARTAS would know.
By Andrew Smith at December 05, 2013

I find it difficult to say that a game of mine has fans. Nevertheless it seems to be true, and I would go so far as to say that Rob Lang is the biggest fan of Siege that I know of.

Or at least that's what I learnt around seven or eight minutes into this.

Thanks for the appreciation, Rob!